At the turn of the New Year, the government announced that the Sustainable Housing program (Baan Mankong) would be cancelled and all programs would be absorbed under the National Housing Authority (Baan Ua Athorn).  For the Sirimin community, that would mean that the construction and 4 years of building towards formal home and land ownership would be impossible.  Housing options for the National Housing Authority require people to use commercial banks, which are not an option for people who are informal laborers (which comprise roughly 70% of Thai people).

Dachanee “Kaew” Ariso, called all the members of the nascent Sirimin community who are scattered all over the country to join along with the citizen agency: Collective for the Community Organization for the Urban Poor (Thai organizational names are hard to translate!) to plead their case before Parliament on January 7.  18,000 people came to express their concern and request the reinstatement of the Sustainable Housing Program.

Prepared to spend many days and nights at Parliament waiting to speak to senators or government officers, the crowd was shocked when the Vice Secretary of the Prime Minister came to address the group.  Supawn Andawong appeared in the afternoon to express his apologies and to announce that the appointed officer who made that decision would be removed from his position and requested that the representatives from the people would help appoint new leaders who would better be able to communicate with citizens and understand their needs.

So, on Jan 16, 30 representatives from the Collective will assist the Prime Minister’s office in appointing new officials to lead the Sustainable Housing Program.  We are excited to see what happens next and thank the government for their understanding and cooperation!!! 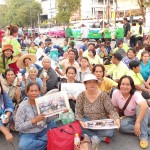